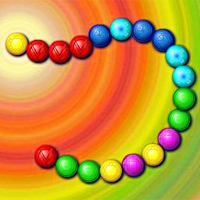 Marble Lines is a free match 3 game where players have to destroy the line of colorful marbles before the balls can reach the end. To make balls disappear, you have to form groups of 3 or more identical marbles. A new line of marbles will appear in the maze at the beginning of every round. Balls will be moving on the path of the maze towards the whole in the end. Your shooting point is the center of the maze. Rotate the launcher charged with the next ball and shot by clicking with the mouse.

Try to eliminate as many balls as possible with one shot. Match colors to shorten the line and don't let it fall into the black hole. Trigger several explosions with one shot to score more points. Some cool power-ups will show up in the marbles during the game. Also coins will appear on the screen. To reach them, you will have to shot a ball through a gap of other balls. Have fun playing Marble Lines online on Silvergames.com.