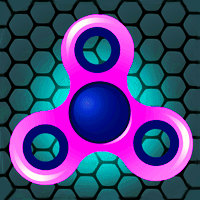 Play Super Spin IO, the cool fidget spinner themed multiplayer online IO game! Inspired by the popular toy fidget spinner, which was actually created to help people to cope with stress and increase attention span, but became really popular among the famous youtuber and even celebrities, this game enables players to play with virtual spinners and compete with other players from all over the world. So don't waste any more time and start having fun! Enter a nickname, customize your toy and step into the giant arena! In the SuperSpin IO game, players are in charge to move their spinner through the map and collect shining colorful gems, scattered all over the playfield. At the beginning of the game, your spinner won't rotate, but the more gems you collect the faster it will be spinning.

Collecting gems will also make your toy grow. Every collected crystal gives you 1 point, and makes you spin a bit faster. Try to earn as many points as possible to become the leader of the game and take your nickname to the top of the rating list. Another advantage, that the big score gives you is invulnerability. Players can eliminate their opponents fidget spinners and thus receive all their points. To kill another player you just have to bump into his or her spinner, but only if your victims score is at least 15 points lower than yours, otherwise you will die hitting much bigger fidget spinner or just bounce off if your enemy has the same number of points as you. After you successfully eliminated your opponent, you can collect all his points, which will appear in the form of gems on the map. Make your fidget spinner the fastest and the biggest on the whole map! Enjoy SUPER SPIN IO!

How To Play SUPERSPIN IO

Control your spinner by moving your mouse, the spinner will follow the cursor on the screen. Press the left mouse button to boost, it will help you to escape, ones the enemy is near or chase the victim. In the Spin IO game players are also able to customize their spinners with different national flags, funny pictures or popular internet memes and choose a color as well, before entering the playfield. The mini map in the right corner of the screen shows your current location and also makes you see the areas with the biggest number of players.