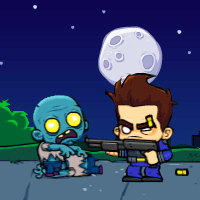 Zombocalypse 2 is the sequel to the cool, but rather bloody shootout action game. Civilization seems doomed, because the zombie outbreak couldn't be brought under control until now, and so the brain-eaters multiply like rabbits. Of course, you can still give a counterattack one last chance in Zombocalypse 2.

Since you'll be attacked from both sides, you'll have to be quick with the slaughter of the undead spawn. The more you destroy and the longer you stay alive yourself, the higher your points will be. Show no mercy and shoot in all directions in this cool shooter game. Have fun with Zombapocalypse 2, another free online game on Silvergames.com!

Road of the Dead
❯