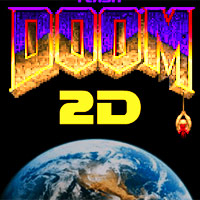 Flash DOOM 2D is an action-packed jump'n'shoot version of the popular ego shooter, in which it's your task to guide the hero through all the levels, fighting against many zombies and other creatures. After the gate to hell was recently closed thanks to a brave marine, humanity's curiosity and research into teleportation ensured that a new portal was opened in the earth and now a never-before-seen danger lurks.

As a member of the UAC security guard, you've been called to the research facility. On the way there, however, you lost contact with the scientists who asked for your help. Find the exit to get rid of the infernal spawn that has seized your foundation. Can you get out of this seemingly hopeless situation? Find out now and good luck with Flash DOOM 2, another free online game on Silvergames.com!

Slendrina Must Die: The House