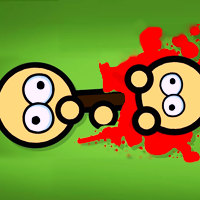 Zombs Royale is a free multiplayer battle royale game, that you can play online and for free on Silvergames.com. The prequel Zombs. io was an online game all about building and defending your home against an endless horde of zombies. In Zombs Royale this fight for survival is basically the same. Only this time around, it's not zombies you are fighting against. It is friends and other online players, who are just as well armed as you are.

In addition to that, you won't spend any time building fortifications and bases on the map. Instead you will be running around while looting crates next to airdrops. Pick up all guns and coins you can find in Zombs Royale, because how else are you going to blast each other into pieces over and over again?

The battle royale arena of Zombs Royale is gradually shrinking as you play. The outer parameter tightens every second giving you less room to hide in. Once you move outside of it, your health will deteriorate rapidly. You have to move inward and face all the other zombs royale players trying to kill you. You will have to move fast. Pick up any gun you can find and fire away. Dodge your opponents' shots, hide out to catch your breath and then go on the hunt again. Will your trigger finger be faster than theirs?

Do you think you can shoot down everyone of them before they get you? Who will claim victory as the last one standing when all is said and done? Join the furious firefights and grab that champion title. Enjoy Zombs Royale, a crazy battle royale game on Silvergames.com!