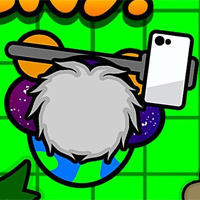 Build Royale is a tense top-down shooting game in the popular io style. Here it is all about building and surviving in a hostile environment. You can play this game online and for free on Silvergames.com. Taking a page from gaming sensation Fortnite, in this battle royale style game, everyone is out for themselves. In Build Royale dangers are lurking behind every corner, and you could die at any moment. On top of that, you need to build fortifications to brace for the coming storm. Do everything you can to protect yourself against enemy players who are out to get you.

In Build Royale io, you have to eliminate every other character running around. Only by being the last one standing will you be able to win the game. You are free to shoot everyone you see with your weapon of choice. Break through other players' defenses and jump up the ranking list of Build Royale by obliterating them all. Don't worry if you've never played in an io game before. Thanks to the quick, yet simple controls it doesn't take long to turn you into an IO expert. Much like Agario classics, such as Zombs Royale or other crazy games, shooting, killing and looting has never been easier to master.

Use your WASD keys to move around, while your Build Royale character is busy reloading their gun. Make sure to avoid stray shots of enemy combatants in the level, because it generally doesn't take too many hits to cut your successful run tragically short. Luckily, it takes no more than a few seconds for another crazy Build Royale game to start again, giving you a new chance of righting a wrong. Or rather killing even more of those pesky competitors than before.

If you build walls cleverly, and time your potshots right, victory royale is bound to be yours. So what are you waiting for? Enjoy Build Royale, a cool battle royale!