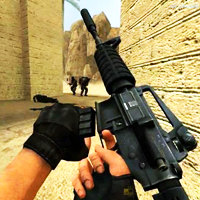 Combat Strike 2 is a free multiplayer first-person shooter where you have to shoot down all of the opponents. Join a team of fighters or create a new room. You will get rewards for every accomplished mission. Use earned money to buy new guns and rifles. Even if you get killed by an enemy, don't worry, you will respawn in just a couple of seconds. You can recognize the members of your team by a green bar above their avatars. The soldiers without the green bar are the ones you have to kill.

Join a room with players from all over the world in Combat Strike 2 online on Silvergames.com. In this classic shooting game, you play an elite soldier as part of a team fighting against another team. Explore the expansive and varied maps and environments. Find the bottlenecks to trap your opponents in, and take them down methodically. Lead your team to victory by effectively using a wide range of weapons. Purchase upgrades for your fighter and lead your team to victory. Let's see how long are you going to last in Combat Strike 2.