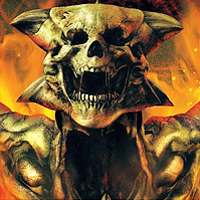 Doom 3 is the third installment of the popular survival horror first person shooter and you can play it online and for free on Silvergames.com. The year is 2145 and humans have built research stations in planet Mars. A scientific research into teleportation has opened a door to hell.

As one of the last survivors of a massive attack by demonic creatures, you have to fight against the attackers with powerful weapons and prevent the evil from spreading. Play the demo version of this game for free right now! Enjoy Doom 3!