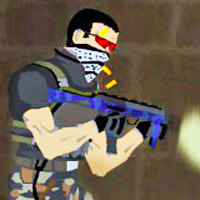 It will be up to you to use superiour tactics, formidable firepower and just a little bit of luck to turn your opponent into ground meat. Collect guns, ammo and grenades and use them wisely. Aim well and kill quickly. Because the next invader is waiting to take you down. Will you survive the endless onslaught? Find out in Combat Intruder Training!