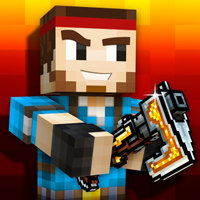 Pixel Gun 3D is a free multiplayer survival shooter with battle royale mode in the style of Minecraft. Go into battle against a horde of zombies. Play a multiplayer battle against players from all over the world. With your trusted pixel gun in hand, you can take on all challengers. Survival is the ultimate goal. The best way to survive is to fire your gun at anyone that crosses your way. Earn money by shooting pixelated enemies in this free multiplayer shooter. Then you can buy new guns and new skins for your character.

Be warned, though, your enemies also make use of all their weapons to shoot at you. Only the right mix of skill and luck will let you survive. Do it long enough and you win the game. Play different modes of this survival shooter. There is sure to be one that best fits your abilities and mood. Maybe you like Pixel Gun 3D single player campaigns about hunting.

You can also play multiplayer battles with pixel enemies who shoot their guns at you from all directions. The single player mode of Pixel Gun 3D adds another twist to the game's survival challenge. You have to find a number of objects in each level to unlock new maps. But don't just run around checking the ground for Minecraft style objects. You're not suddenly free of the threats and dangers that the undead pose to you.

In this saving your own skin is not only sensible, it is downright necessary. In Pixel Gun 3D only the quickest shots and the meanest players make it to the end. Leap into the combat battlefield and join the deathmatch. Find out who can make the most coin out of killing everybody else. This is pixel warfare. And it is really tense or nerve-wracking. Wait for your opportunity as a blocky sniper. Jump into the line of fire. Blast away anyone who crosses your path. Put your carefully selected weaponry to good use. Leave nothing but pixel corpses in your way. Join the multiplayer fun that is Pixel Gun 3D and put those undead freaks back into the ground!