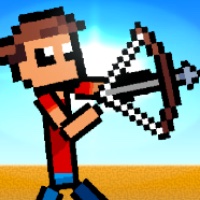 Stick Archers Battle is a fun one button bow and arrow duel game for 2 players to find out who has the better aim. Play this pixel block graphic battle game online and for free, against the CPU or challenge another player on the same computer. Throw as many arrows as you can at your opponent to win 5 rounds to win the match.

Press your button to load power and release when your character is aiming at your opponent. As simple as it may sound, you will have to match the right angle with the right power to hit your enemy, so timing to start loading power is key. Hit your opponent in the head to kill him with a single shot. Have fun playing this free online game Stick Archers Battle on Silvergames.com!