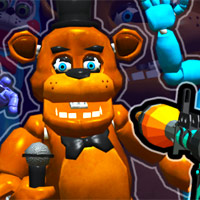 Today is payback time, and we are talking about machine guns and grenades. You won’t have to simply survive, hiding around like a coward, but rather blow up those stupid robotic bastards in pieces. Go find them all and shoot the crap out of them without being killed. Enjoy playing FNaF Shooter, a free online game on Silvergames.com!

Slenderman vs Freddy the Fazbear