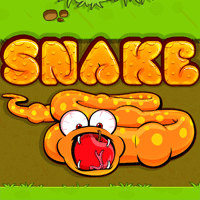 Snake is a classic arcade game where the player controls a line which grows in length. A new cool version can be played online on Silvergames or Google for free. You are a hungry snake that slides across the map filled with food and obstacles. In the classic snake game setup, there are no other reptiles or players around to interrupt your crawling. Or play the multiplayer and io variants of this online game and you will meet real opponents.

Your goal is to eat fruit without crashing into any bits of wall or even crossing your own snake tail. As you gulf down edible items of all sorts, colors and sizes, your snake body grows longer and longer. This makes playing this free game increasingly more difficult, since you may run into either your own snake tail, or some solid object in the level.

At first you can move around freely without a care in the world. But as your score keeps going up so does your body length, until you're basically a monster snake on the prowl. Soon you will be sweating bullets trying to keep your snake from eating its own tail. Like Google trying to avoid the grasp of antitrust laws. If you play Snake Game in adventure mode, the game more or less stays the same. But instead of simply staying alive for as long as you can, you have to collect specific pieces of fruit within a strict time limit.

You can exit to the left to reappear on the right; or you can escape from the bottom to then show up at the top. Like most video games of its time, the controls are fairly easily ported to the arrows keys of your keyboard. The pellets, reminiscent of retro gaming, are now fruit but you still need to prove your gaming skill in countless levels.

Since the classic snake game appeared, there have been many variations on this arcade classic and even remakes, like the online version on Google itself. There are free multiplayer snake games, that let you fight it out with other snakes. In those games the first players often fight other silly serpentes for a chance to get on that leader board. Similar games let you frantically swipe with your mouse to escape other players. It's always a fight over who gets to be on top of the ladder every game. Today you can find snake games like this one on many mobile phones as a neat way to pass the time.