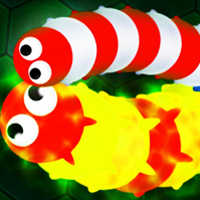 Wormax.io 2 is the sequel of the fascinating IO game with the worms that just eat around to become the largest one on the field. You can play this game online and for free on Silvergames.com. Finally, a new instalment of this awesome multiplayer game has arrived for you to slither through the battlefield looking for food and other players to kill and eat their remains.

Now, instead of orbs you get to eat actual food and the orbs you leave behind when another player kills you are guts and meat. Sounds like more fun, doesn’t it? Also, you have three lives instead of one single chance. Just crawl around and look for food and bonuses, like the magnet, the magnifying glass, the no pooping bonus, which lets you speed up without losing weight, and much more. Have fun with Wormax IO 2!