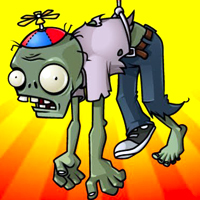 You have different weapons at your disposal - either you let the zombies fly with your cement balloons or you just kill them directly with a skillful knife throw. Think strategically, because you only have a limited number of weapons at your disposal and in the end they all have to be dead. Can you do it? Have fun with the undead in Balloons vs. Zombies 2 on Silvergames.com!

Road of the Dead
❯