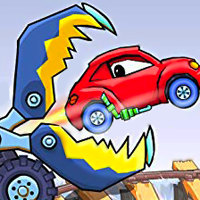 Car Eats Car Evil Cars is another sequel of the fun-addicting side-scrolling game series with the wheeled characters that you can play online and for free on Silvergames.com. After the poor, hard-working cars have been imprisoned for being too old and rusty, you need to help them escape. Speed up and reach the end of every level, getting rid of evil chasing police cars and collecting lots of gems to buy cool upgrades.

Show them it was a mistake to underrate these three powerful vehicles and reach the island of the freedom. Do you have what it takes to escape from the police and make it to the very end of this fun racing game? Find out and have fun with Car Eats Car Evil Cars!