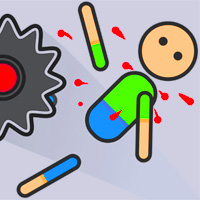 Kill the Dummy is a funny slicing free online game in which you have to shred tiny human dummies with a saw and dodge bombs. Have you ever played Fruit Ninja? Well, why would you want to slice fruit when you can slice people? Don’t worry, those aren’t real human beings! Don’t let all the screams and blood trick you.

Use a spinning saw to cut those little dummies in pieces, because bananas and melons aren’t fun anymore. Whatever you do, avoid touching the bombs or you will lose the game. How many dummies can you destroy until you miss three or blow up a bomb? Set the highest score possible and have fun playing Kill the Dummy, another awesome free online game on Silvergames.com!