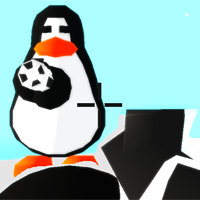 Snowar.io is an amazing snow and fighting game that you can play online and for free on Silvergames.com. It’s the time of the year where penguins take over the battlefields and snowballs fly everywhere ending the lives of the weakest. Or a less dramatic way to say it: SNOWBALL FIGHT!!! Snowar.io is a fun first person shooting multiplayer IO game.

Control a cute, but merciless penguin on a battlefield and try to eliminate other players shooting your snowball machine gun. Avoid falling into the water or you will lose. Be the last man standing and show who rules the white and cold winter. Have fun with Snowar IO!