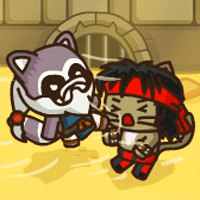 Strike Force Kitty League is a great fighting game in which you'll have to train your cute cat team and help them achieve victory. It's time to put an end to the long battle between the kingdoms of raccoons and cats. And the best way to do this is through a brutal arena battle to the death.

This is the Only Level 2

Adopt a Son or Daughter and Form your Family

Adopt a Cat or Dog To Your Family