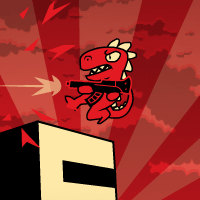 The Last Dinosaurs is a classic arena shooter with dinosaurs and many many cats. Your race lived underground for a long time, but now it's time to fight against the reign of the cats. Jump from one platform to the next, collect useful power-ups and health packs to make it as far as possible.

Your enemies will come from all sides and you can fight them with your numerous weapons, so they won't stand a chance against you. Upgrade your weapons, abilities, and team to become unstoppable. Buy missiles, coin magnets, shields, grenades and much more in the store. Lead the last dinosaurs to victory! Have fun with The Last Dinosaurs, another free online game on Silvergames.com!