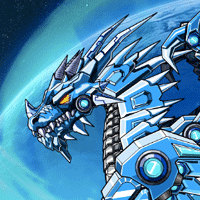 Robot Ice Dragon is a puzzle game in which you have to assemble a large, blue fighting robot from a large number of pieces, and then let it compete in a battle against another mechanical monster dragon. Puzzle out how to build your personal Robot Ice Dragon and get ready to fight! In the arena you can test your blue construction in a turn-based battle against another dragon robot. Much fun!

The dino parts are lying around randomly and you have to assemble them so that in the end a powerful animal is created. Or is it a machine? If you are a fan of dinos and robots, this game is for you. Are you ready to put your brain to work? Have fun with Robot Ice Dragon on Silvergames.com!