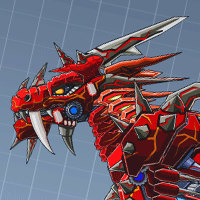 After you have successfully assembled the dino, you can first test the skills in a training session. After that, you can compete against a CPU dino and defeat your enemy with the help of your skills, such as spitting fire and many more. Are you ready for this cool dinosaur game? Have fun puzzling together Robot Violent T-Rex on Silvergames.com!